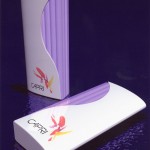 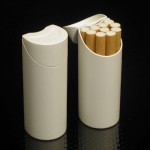 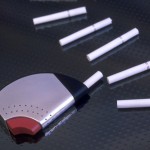 Around the dawn of the 21st century, the US Government was making it more and more difficult for tobacco companies to sell their products.  Warning labels had already been added to cigarette packaging warning of the dangers of smoking, but legislation was now being proposed that would prevent cigarette companies from having any graphics on their packaging at all.

To address this, Brown & Williamson, makers of Kool, Capri and Lucky Strike cigarettes (among others),  came to Fisher Design looking for a way to continue making their products unique.  We proposed developing uniquely shaped packages, since there were no limitations on the structural design of cigarette packaging in the proposed legislation.

At least fifty different unique shapes were initially sketched out by members of the design team, including at least a dozen that I did.

I formatted all the concepts generated by the team for presentation to company executives.  From this review, ten ideas were selected to move ahead with.

Taking the ten selected ideas (including a few of my own), I used Cinema 4D to model, render and create a short animation of how each package would function.

These renderings and animations were presented to the company executives, and three concepts were selected to create physical models of for final review, focus group testing, and product launch.

Before that could happen, the proposed legislation was scrapped, and Brown & Williamson never pursued the unique packaging ideas.  In 2004, the company merged with RJ Reynolds, and became Reynolds American, Inc.